Baseball's Contribution to the Demise of Liz Phair 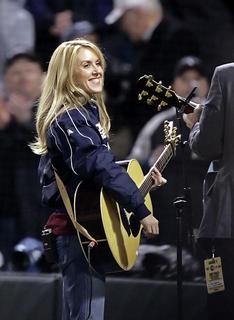 Okay, so any of you who saw the 7th inning stretch tonight know that Liz Phair does not do well performing simple anthem-like songs that require her to stay in a normal key for longer than a second or two. Here's the deal, though. If Liz Phair sang like Celine Dion, we wouldn't love her. Liz is not about the long drawn out notes, and those who think so have only listened to her self-titled album that definitely used production to enhance the pop sound in her songs. Liz is about great lyrics and quirky melodies. When she released the album that sent her into pop-stardom, she caught a lot of flack for stepping so far out of her realm. Now people are criticizing the performance tonight and she's getting even more negative media. If this was your first exposure to her, I beg you to look at some of her old stuff. You can start by checking out the difference between songs like "Polyester Bride" and "Supernova" and songs like "Everything to Me" and "Why Can't I". I'm a big promoter of her right to try something new (or as others might say "sell out") in order to put food on the table. I enjoy her new music just as much as I enjoy her old stuff. However, when she tries to take this new pop persona into things like her performance tonight, I have to admit that her voice actually belongs better with her old stuff. With that said, before you hate her, check out her old stuff and get a glimpse of how amazing she really is.

have you heard her podcast yet? i'm downloading it now.