Ode to My Gall Bladder

I never knew thee
until you hurt me,
and now I'll soon be
without you.

Your stones of bile,
so wretched and vile,
have cramped my style,
it's true.

But soon a doc's knife,
with only some strife,
will take your small life
of no value.

I'll eat, drink, and play
like back in the day
when things went my way--
before you.


For those of you who don't know already, I'm having my gall bladder removed on Wednesday. I'll be out of commission for a while, and I would love good thoughts and prayers for no complications and a speedy recovery. Thank you!!! 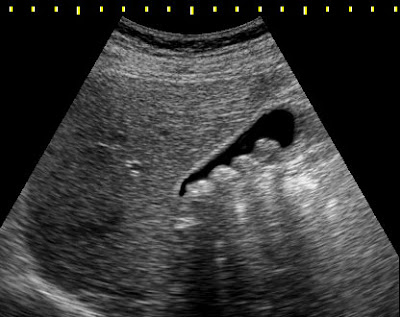 As I was lamenting over being 26 today, my sweet boyfriend asked why the move from 25 to 26 was such a big deal. I told him that it made me feel old to know that I was no longer in the first quarter of my life.

He very kindly pointed out that the first quarter of my life actually ended the day I turned 25.

When the Comments are the Best Part

Mental Floss featured an article last week on pomegranates. Not only does it offer a couple of nifty little facts, such as the relationship between pomegranates and grenadine as well hand grenades, but it also offers religious symbolism. The best part, though, is comment #1:

"They now also have pomegranate tequila."

poo poo on not having the liver capability to rush out and try it right this second
No comments:

Email ThisBlogThis!Share to TwitterShare to FacebookShare to Pinterest
Labels: foodie

Well, maybe not more kitties, but there is a new kind of kitty.

You can read about the Bornean Clouded Leopard at Science Daily.

This is the best kind of news.
No comments:

Why I Love the Doctor

I went to the doctor today for the second time in five weeks to find out what is causing my mysterious stomach ailment (also known as the evil ender of my drinking days). While I usually bemoan the scale in his office because of its overt attempts to bring down my self-esteem, today I wanted to kiss the damn thing. I weighed in at 12 pounds less than I did on the last visit. Taking into account the fact that I was wearing jeans then and a skirt today, we'll call that a 10 lb loss. Maybe the weight loss will motivate me to stick to the extremely limited alcohol consumption plan. At least for a while. :)
1 comment:

Christian Teens Rally to Save SF

By the tens of thousands, Christian teens poured into proudly liberal San Francisco on Friday for a two-day evangelical extravaganza where they would rock, pray and provoke progressives, who accused the movement of working toward a theocracy endangering "San Francisco values."

Man, if my church had come out here to pray for progressives, I just might have been rescued from the hoards much sooner...maybe even would have made it out here earlier.

I wonder how many of these kids defect once they are exposed to this amazing city? Let's see some stats on that, Jerry Falwell.


There are 299,968,595 people in the United States of America. If everyone in the U.S. lined up single file, the line would stretch around the Earth almost 7 times. That's a lot of people.
The U.S. Census Bureau statistics tell us that there are at least 88,799 different last names and 5,163 different first names in common use in the United States. Some names are more common than others.
There are 49,535 people named John Smith in the United States. There are 1,048 people named James Bond, 113 people named Harry Potter , 503 people named George Bush, and 31 people named Emily Dickinson. However, Johnny Cash (39 people) songs aside there are, statistically speaking, no boys named Sue.
What about you? How many people share your name? Enter it and find out how many of you there are.
The combination of German and Welsh makes mine a little more difficult to find. There are only 7 of me!


So now I'm on a quest to find these 7 people who share my name:

Email ThisBlogThis!Share to TwitterShare to FacebookShare to Pinterest
Labels: aboutme

I Love You, Bono!

Gap's Red campaign isn't doing so (red) hot. $100 million in marketing costs only led to $18 million actually going to the Global Fund. The Ad Age article uses a sharply negative headline on what is otherwise a balanced presentation to show that some are concerned about the cost to benefit ratio.

As a nonprofit professional, I tend to agree with the guys at buylesscrap who think we should encourage direct giving rather than consumption. However, that "meager" $18 million is a whole heck of a lot more than the $13 million they received from the private sector last year. With a budget of around $1 billion, Global Fund receives 99% of its funds from governmental organizations. Any addition to that tiny 1% from corporations and everyday folk is good, right?

The guys at buylesscrap.org don't think so. They promote charitable giving rather than buying crap we don't need. Of course, they're right in so many ways. In theory, all people should give directly. In theory, communism is a great idea. But we've seen how that works in practice. The fact is that many of the people who bought red items would not have dropped $10 into a jar at the counter. Sadly, so many people need motivation to give that consumerism is the only way to draw them out.

So perhaps throwing Bono out there to motivate goodness isn't such a horrible thing. If someone is going to go buy a shirt anyway, they are more likely to pay extra for a charitable shirt than they are to forgo the shirt altogether and make a direct donation. Sad, but true. Yes, we should give up the junk we buy, but most people aren't ready for that. So let's take some baby steps and get a corporation to donate a portion of the products we buy for them. Not a horrible idea.

It could work, and I think it would have worked a lot better if the public really understood the problem. The marketing campaign has really focused on tying the project in with Bono and creating a buzz around the "everybody is doing it-even so and so celebrity" idea. It might have been nice if a portion of that $100 million marketing campaign actually demonstrated the good work of the Global Fund and the need for support. This might be one area where corporations could have used the nonprofit field to come in and show them how to pull those heart strings.

As for that cost to benefit ratio, the Ad Age article is doing a little propaganda of their own.

The $100 million was funded by Gap, Apple, Motorola, and others. This result in some amount of income for each of these companies, PLUS $18 million to the Global Fund. Ad Age is assuming some standard to compare this against, but this is a fairly new idea in the large corporate world and thus doesn't really have a standard to meet. Even if the income for the companies is lower than $100 million, that loss is on the part of the companies and could really be considered an in-kind donation to the Global Fund.

So give it a rest, naysayers. We can't really judge how well it's doing yet. This could be the start of a great movement. Paired with the absurdly large philanthropic gifts from major CEOs as of late, this could be the beginning of something bigger than we ever thought.

Maybe, just maybe, consumerism could save the world.

Crossing my fingers, but not holding my breath.
No comments: 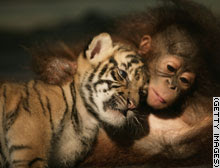 These little guys are best friends. I don't think I can handle the cuteness. Look at the way that orangutan is hugging that little fuzzy kitty.

Too bad in a couple of months the tigers will prefer the primate's meat to its love.

Read about this odd couple (and the other two animals involved) on CNN.

You think the orangutan will feel heartbroken when it's friend tries to eat him?
No comments: