"Odd numbers are the devil. Even numbers rule the world."
"What about a number like 300? It's even, but the predominant digit is odd."

~teens on the 47, Saturday night
No comments:

And I realize this is taken slightly out of context...

The Washington Post gave us an Earth Day present:

Singer Sheryl Crow and environmentalist Laurie David have been traveling across America on a two-week Stop Global Warming College Tour, which winds up today at George Washington University. Crow and David (co-producer of the documentary "An Inconvenient Truth" and wife of "Curb Your Enthusiasm's" Larry David) have been touting their cause and chronicling their travels in a rather idiosyncratic blog. Here, on Earth Day, are a few excerpts:

You can read all the excerpts yourself, but this is the one that has me going:

Crow (4/19, Springfield, Tenn.): I have spent the better part of this tour trying to come up with easy ways for us all to become a part of the solution to global warming. Although my ideas are in the earliest stages of development, they are, in my mind, worth investigating. One of my favorites is in the area of forest conservation which we heavily rely on for oxygen. I propose a limitation be put on how many squares of toilet paper can be used in any one sitting. Now, I don't want to rob any law-abiding American of his or her God-given rights, but I think we are an industrious enough people that we can make it work with only one square per restroom visit, except, of course, on those pesky occasions where 2 to 3 could be required.

Oh yes, this will save the world.

Honestly, though, are Sheryl Crow's "pesky occasions" anything nearly as "pesky" as the rest of the world's? The woman doesn't eat. No wonder she doesn't need toilet paper.
No comments:

Email ThisBlogThis!Share to TwitterShare to FacebookShare to Pinterest
Labels: rants 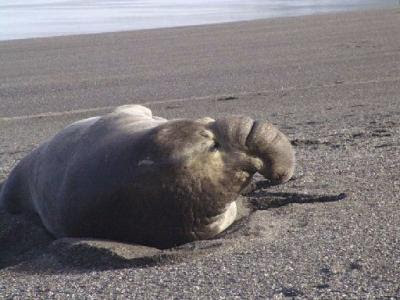 I promise to blog about Vegas, but first I have to mention the giant elephant seal that's attacking people and animals in Sonoma. I know it's probably pretty scary, but this cracks me up. I can't help but laugh when I see his picture. The best part is that the big ugly thing's name is "Nibbles".

I'm even more entertained now that I found this video of a different elephant seal.
1 comment:

My Invitation Must Have Been Lost in the Mail

The Global Philanthropy Forum is taking place at Google this week. I so want to be there!!! Just to meet some of the people mentioned in the San Jose Mercury News article. Even Judith Rodin, the CEO of Rockefeller Foundation, is jumping on the capitalist philanthropy model! I want in!

They invest in social causes as they would the stock market or a start-up, but the return is measured not only in financial viability but also what impact the initiative has in solving global problems. The new hybrid model has been dubbed "philanthrocapitalism" and its practitioners "philanthroprenuers."

Yet others see a new era dawning.

"Google exemplifies this emerging blur between for-profit and non-profit," said Peter Hero, an adviser to the Silicon Valley Community Foundation. "It gives them an ability to invest in a for-profit entity that doubles or triples the bottom line, provides a financial return but also a significant social and environmental return."

The guiding theme of the Global Philanthropy Forum meeting this week is to explore market-based solutions and encourage entrepreneurship. Instead of funding a medical clinic, that might mean investing in a biotech company for a new vaccine.

Working in bookstores for several years, I became way more acquainted with new age authors and theories than I would have ever thought possible. All of the talking to the dead and the conversations with God and the silver broomsticks were actually pretty entertaining most of the time. One of the most prolific authors in the New Age section was Carlos Castaneda. An article in Salon today discussed his legacy.

Castaneda appealed to all types of believers, including those who were too rational for new age. Whether or not you believed he actually met with a Shaman and saw through to the source of all things, much was still valuable regarding the way of life he preached. Much like any other belief system, it's easy to pick and choose great teachings from his works. (You may not belief Christ rose from the tomb, but it's difficult to argue with "treat your neighbor as you would like to be treated.) This pulled in a great number of people and Castaneda was dubbed the Godfather of New Age.

In addition to the appeal of the masses, Carlos drew in academics and intellectuals with what seemed to be a knack for narrative anthropology. Because he was simply engaging in the rituals of the Native Americans, it seemed more that he was studying a culture, and his books were taken as real anthropology. His books have generally been accepted as non-fiction throughout the years. In 1972, a great deal of skepticism led to the debunking of most of Castaneda's lies, and he disappeared from public in 1973. It's what happened after this point that drains the humor from the situation.

Castaneda began a movement known as Tensegrity, and had many devoted women followers known as witches that included past and current lovers. They lived in secrecy, separated from theif families, used numerous aliases, and didn't allow photographs.
No comments:

Is a sad sad day.

If this doesn't make affect you, go pick up a copy of Slaughterhouse Five and read it right away.

At the very least, take a moment to learn why this incredible man was so important to literature and the world at large.

When I was told I'd need to have surgery, the first thing I did was attempt to get an estimate of the costs. The surgeon's office told me he charges $3,500, and gave me a rough estimate that the hospital (the same one they always use) varies greatly but shouldn't be more than about $5,000. I tried again and again and again and again to contact the financial counselors at CPMC to get an estimate, and was never able to talk to one of them. There's actually a bug in their phone system that sends you back through the same cycle over and over without ever getting you to a person or even to be placed on hold. I finally just started pushing zero to wait for someone that could connect me to the right person, but after 6 days of trying at least twice a day, never actually spoke to a human.

Today I called billing and chose the option "pay my bill". I was connected right away and informed that my total comes to $19,000. Read that again. And again. Now add that to the surgeon's costs. What I thought would be around $10,000 (and thus only a few hundred for me after insurance), is $23,000. Twenty-three thousand dollars.

Not for the surgery mind you...just for the room, the anesthetics, the equipment, and the nurses who helped me for 4 hours. Oh yeah, and the morphine. Lots and lots of morphine.

I can't imagine what it would have been if I'd stayed overnight.

This is insane. Insane.
No comments:

First day back at work. It's actually not nearly as bad as I thought it would be. I'm cabbing it so I'm not abused by the bumpy crowded busses, and I'm working from the nice comfy couch in the office, so all is okay. I am, however, at work in sweats and a t-shirt. Just waiting for my swollen tummy to go back to normal. Off to get a few more things accomplished before I head back home!
No comments:

The Pain, The Pain

OMG I had no idea it would hurt so badly.

Pete had to work from home today because I can't do anything for myself just yet. Not fun not fun.

The worst part? I can only lay on my back and sit in certain positions. This leads to sleepless nights and sleeping limbs.

I can't imagine having to deal with a C-Section recovery and a screaming baby at the same time. To all you mothers out there, I'm tipping a big giant hat your way.
No comments:

I had my surgery today. All went well. They gave me a video! I'll post it soon.

Thank you so much for all of your well wishes.
No comments: