Diane Vadino Can Kiss My Rump

Diane Vadino wrote a terrible review of 8 cities one shouldn't live, but should visit.

San Francisco: Do not try this for home
San Francisco seduces, to be sure. Walk certain streets — up crowded, curving Lombard, along Union to Coit Tower, from Cole Valley to Twin Peaks — and every intersection reveals a picture-postcard view: of two iconic bridges, pinpoints of light flickering across the bay, of golden sunshine filtering through stands of eucalyptus trees.

Other neighborhoods, though, reveal images more police-blotter than tourism-brochure: a staggering homeless population, rampant open-air drug use, public parks and buses made intimidating and unsafe by unruly combinations of both. To live in San Francisco is to daily confront these issues — and probably from under a dense bank of fog. (The climate's as much London as it is L.A.)

By all means: Come. Dress warmly. Climb Twin Peaks. Visit SF MOMA, the new DeYoung, and the Legion of Honor, three world-class art museums. Shop Hayes Valley and Valencia Street; get brunch at Tartine, lunch at the Dolores Park Café, snacks at Bi-Rite, and dinner at Delfina. (This can be accomplished without leaving one short stretch of 18th Street, quite possibly the world's most densely packed row of organic and locally produced deliciousness.)

Rent a car on a nice day and drive across the Golden Gate to Point Reyes National Seashore for scenery that suggests an impossibly sunny Scotland. And then, go home, safe in the knowledge that San Francisco puts on its best face for its guests. Leave the hard work of citizenship to the locals.
- Diane Vadino

Screw you, Ms. Vadino. Go live happily in your hole in the middle of Nebraska and leave us all the heck alone.
No comments:

From Best of Craigslist:

....in case you were wondering, yes, we all saw. And were horrified!

You might remember the incident, huh? About 9:45pm last night, heading north. Why would I know the time, well I had to look at my cell phone to keep my eyes from looking over as you pulled his cock through his jeans and into your mouth.

How could we all not notice you? You were so ugly and those boobs were so little it was just obvious. Then the guy you were with looked like Billy Bob Thorton in "Slingblade". Except even weirder looking. Quite a pair.

So thanks for hopping on that very crowded bus, sitting 2 feet from me and making out with the goofy looking guy. That was odd, but no big deal. But when I looked over and your head was in his lap I was like -- "Are you fucking kidding me, you are now going to blow him?".

I thought it was hilarious that all those Mexican guys sitting right next to you said and did nada. I almost moved away but could not stop looking over. I kept thinking that this is going to make a good Craigslist "missed connection" and maybe a "best of".

The weird part is that the guy was staring at me with this serial killer look the whole time you were servicing him which was a little creepy. Like the whole fucking thing wasn't totally creepy.

So much like a human in "Invasion of the Body Snatchers" I kept scanning around looking to see if anyone else was registering this. I kept locking eyes with the young punk rock girl across from me. Her boyfriend was being oblivious but she kept looking at me, rolling her eyes and giggling. As they reached that climactic moment she was uncontrollably laughing out loud and it really helped me keep my sanity. To pass the time I texted my sister in real time the blow by blows (no pun intended) and listened to my iPod.

Well, thankfully you two freaks got off somewhere near the Tenderloin after he came in your mouth.

When it was over I had to say something and just made eye contact with everyone and said "Did we all see what I think we just saw?" and everyone laughed out loud.

Learned something new last night. The 49 is a bit more rocking than the 47.

Reading "Best of Craigslist" today, I ran across this post:

I know you are a web site, so you do not feel as normal humans feel. But you should still be thanked for the magic that you were able to connect between two troubled souls.

Not long ago, a random "let's talk" post cross your pages, and garnered a response from another soul in the same situation: just looking for someone to talk to.

The two moved from your domain into their own and spoke constantly. They met, and had a wonderful time together. They felt things neither of them believed they deserved, and felt things they'd forgotten over the years.

You put them together. All they did was click. And by clicking, they "clicked."

I just wanted you, Craigslist, to know that last night, the two of them were awaiting their dinner when he suddenly took a knee and said to her, "(Name blurred), you asked for my heart, but you saw into my soul. I have nothing left that I can give you other than my life. Will you marry me?" And she responded, "Just kiss me already."

A month ago, they were complete strangers. 24 hours ago, they agreed to embark on life's greatest journey together. And none of that could have been possible -- with these two people -- without your help.

So, from both of us, we say Thank You, Craig.

And to all of the souls who continue to seek their true love, it really is possible.

"A month ago, they were complete strangers. 24 hours ago, they agreed to embark on life's greatest journey together. And none of that could have been possible -- with these two people -- without your help. " Seems like grounds for a liability lawsuit to me.
No comments:

Email ThisBlogThis!Share to TwitterShare to FacebookShare to Pinterest
Labels: love

Apparently there was also a double rainbow!
No comments:

I never thought I'd see this site in San Francisco: 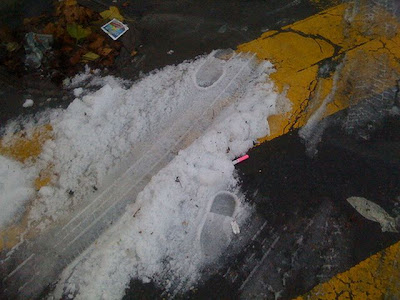 A part of me only actually believes this happened because I got hit in the head with tiny pellets of hail yesterday afternoon. I still want to go see these little piles, though. It's a tourist attraction for locals!
No comments: