Just also happens to be the most amazing boyfriend ever. Ack, we did it :)

almost...now we just have to get our OWN apartment that's big enough for all our stuff (or his stuff, I should say...I don't have nearly that much :))
1 comment:

Most of you have probably heard about the storms that ripped through the midwest this past weekend. The Chronicle even covered it in yesterday's paper.

Hundreds of homes and businesses were destroyed or damaged in Missouri alone by the tornadoes, high wind and hail as big as softballs. There were no immediate damage estimates across the Midwest.

These are a couple of the hailstones my nephew grabbed out of the bed of his truck when he got home Sunday. 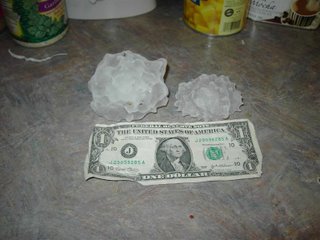 And they all asked if I was scared of getting hit by earthquakes out here.
No comments:

Email ThisBlogThis!Share to TwitterShare to FacebookShare to Pinterest
Labels: missouri

The Nobby Trees of San Francisco

Lining many of the residential streets of San Francisco, particularly in the Richmond and Pac Heights, are these cool looking trees that all look the same. Some of them have branches and leaves, but most of them are cut back in the winter to reveal nothing but a trunk and a bunch of nobs. A few weeks after I moved here I started asking what kind of trees those were, thinkin they MUST be the city tree or something. Nobody knew. I've told myself countless times that I'd google the nobby trees and finally did so. 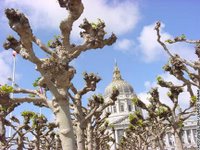 My quest is over.
No comments:

My favorite quote from Candy Freak:

Every now and again, I'll run into someone who claims not to liek chocolate or other sweets, and while we live in a country where everyone has the right to eat what they want, I want to say for the record that I don't trust these people, that I think something is wrong with them, and that they're probably--this must be said--total duds in bed.

This book also taught me that yankees don't know about Valomilks, Goo Goo Clusters, or Cherry Mash. How sad for you.

Now I'm on a mission to find Five Star candy bars, because we sure as heck don't have those in southern Missouri.
No comments:

I've read a lot of great books recently. I really should dedicate an entire blog to each one, but it's just not going to happen. Devil in the White City was a suspenseful account of the rise of Chicago with the World's Fair (which included the invention of the ferris wheel), and one of the most prolific serial killers in the world. Them was a fascinating look into extreme groups from Ruby Ridge militia men to Ku Klux Klan members to radical muslims. Candy Freak was a yummy read about the candy bars that are being pushed out by Hersheys and Mars. You'll notice a trend here in that I haven't been reading fiction lately. I've been a bit bored by the novels I've begun, and decided to stick to more educational pieces. One book, though, recently changed my mind.

Kite Runner is by far one of the best novels I've ever read. It is the story of an Afghan boy/man and his values juxtapositioned against American values and those of the fundamentalists around him in his home country. READ IT! This book should be required reading for our time.

One of the smaller themes of the book, but one I found particularly beautiful, is summed up by something the father of the boy tells him early in the story:

Now, no matter what the mullah teaches, there is only one sin, only one. And that is theft. Every other sin is a variation of theft.

There is no act more wrteched than stealing. A man who takes what's not his to take, be it a life or a loaf of bread...I spit on such a man.

If there's a God out there, then I would hope he has more important things to attend to than my drinking scotch or eating pork.

One of the larger themes is forgiveness, especially that of one's self:

I wondered if that was how forgiveness budded, not with the fanfare of epiphany, but with pain gathering its things, packing up, and slipping away unannounced in the middle of the night.

And I'm not the only one who thinks this is the best book I've read in a long while:

In his debut novel, The Kite Runner, Khaled Hosseini accomplishes what very few contemporary novelists are able to do. He manages to provide an educational and eye-opening account of a country's political turmoil--in this case, Afghanistan--while also developing characters whose heartbreaking struggles and emotional triumphs resonate with readers long after the last page has been turned over. And he does this on his first try.

...Hosseini has created characters that seem so real that one almost forgets that The Kite Runner is a novel and not a memoir. At a time when Afghanistan has been thrust into the forefront of America's collective consciousness ("people sipping lattes at Starbucks were talking about the battle for Kunduz"), Hosseini offers an honest, sometimes tragic, sometimes funny, but always heartfelt view of a fascinating land. Perhaps the only true flaw in this extraordinary novel is that it ends all too soon. --Gisele Toueg

Hosseini's stunning debut novel starts as an eloquent Afghan version of the American immigrant experience in the late 20th century, but betrayal and redemption come to the forefront when the narrator, a writer, returns to his ravaged homeland.... The price Amir must pay...is just one of several brilliant, startling plot twists that make this book memorable both as a political chronicle and a deeply personal tale about how childhood choices affect our adult lives. The character studies alone would make this a noteworthy debut.... Add an incisive, perceptive examination of recent Afghan history and its ramifications in both America and the Middle East, and the result is a complete work of literature that succeeds in exploring the culture of a previously obscure nation that has become a pivot point in the global politics of the new millennium.

Email ThisBlogThis!Share to TwitterShare to FacebookShare to Pinterest
Labels: lit

I am a rockstar

I just came in 4th on a freeroll.

Granted, the payouts only went to the 3rd, but there were 403 people in the tournament and that means I hit 99th percentile.

Email ThisBlogThis!Share to TwitterShare to FacebookShare to Pinterest
Labels: entertainment

So in my second big poker tournament, I placed 17th out of 575. That's 97th percentile, whereas the last one was 95th percentile. I'm pretty darn proud of my 2% improvement.

Although I can only dream of being as good as Pete.
No comments: