Saturday the waves were strong enough for Mavericks to finally be held, after a hiatus from less than stellar waves. The waves were record-breaking, and while the contestants avoided serious catastrophe, several spectators were injured.

So maybe, just maybe, this wasn't the best day to go swimming off the coast of Carmel. Just a thought.
No comments:

"If he can't figure out the public transportation system, well ... I don't want you dating him."
(Mother to teenage girl, overheard at San Francisco General Hospital)

There's more where that came from on SFGate.com.
No comments: 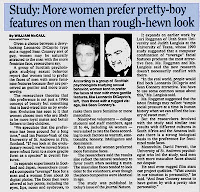 You would think the news that most women prefer pretty boys would make my life easier.

Give me a strong jaw line and a bit of ruggedness any day.
No comments:

She squints as the clouds blow by, letting the sun flash in through the cafe window.
"I just don't get why he hasn't called back. It's been two days. He never takes this long."

One of the other three women at the table hands her a pair of sunglasses.
"Honey, don't worry about it, he's probably out of town...somewhere with no reception."

"Or," another drawls as she examines her reflection in the window, "he's so wrapped up in some other girl he hasn't even checked his phone." She brushes off the death glares and napkin wads.

"Maybe he got into a terrible accident and he's in a hospital somewhere. He could be dying wishing I was by his side! Maybe I should call around?"

"Well, it's better than another woman." She pushes out her bottom lip.

The fourth woman speaks up. "Maybe he's in jail."

"If only he was exciting enough for me to believe that one. It's probably something totally boring. I bet he dropped his phone in the toilet and fried his contacts."

"You really think he's the kind of guy who wouldn't have them backed up?"

"Maybe a friend came into town unexpectedly and he just isn't thinking about it."

"Yeah, the woman he's wrapped up in." This time she dodges french fries.

The phone rings.
No comments: