There's nothing like the smell of the trees after a really big thunderstorm. Lighting and thunder are not rare in southern Missouri. It's one of the things I miss most being in California.

I associated storms with my dad, but recently I've realized I was only thinking about part of the memory. Every time the skies turned grey, my dad would go out on our front porch. We lived on a VERY steep hill which afforded us a nice view from the front.


When a storm came in, my dad used to stand on the porch to watch the valley below and the hills beyond. And of course I would join him. We'd leave the screen door open so Mom could fill us in on whatever the news was saying - just in case a tornado was coming, although Dad usually called it before it made it to TV. Standing on the porch watching storms, watching my dad watching storms, is as much a part of my childhood as school or summer road trips. Mom would prep the indoors, gathering the candles and flashlights, while we observed the conditions.

If you've never smelled a thunderstorm, you're missing out. There's something incredible about the way the air changes just before the wind comes in. This is especially true when there's a tornado, but we'll save that for another time. Both of my parents loved that smell. I had thought only of my dad on the front porch watching the clouds for so long, but recently I remembered something else.

After every storm that happened during the day, Mama would take me out to the backyard. Through the pinkish tinge of the sky that happens after a daytime thunderstorm, Mom and I would hunt for rainbows. If we saw even the faintest tinge of one, or if it looked like there might be one on the other side of the hill, she'd pack up the truck so we could all chase it. If we couldn't find one, the answer was always that we just couldn't quite see it from where we were standing.

My mom's endless search for rainbows taught me to never be scared of the storm. Every time it rained during the day my first thought was, 'I wonder where the rainbow will be!' I don't know if she did that for me, or if it was just part of who she was - I'd like to believe it was a little of both. What I know is I spent hours in my backyard and in my dad's truck hunting rainbows. I always knew they were the reward that came after a great storm.

In February of this year my incredible chosen family helped me honor the anniversary of my mom's death by celebrating her birthday at her favorite restaurant. Back home, there aren't a ton of options for great food, and Mom's all time favorite was Red Lobster. We decided to go the Sacramento location and make a long Tahoe weekend out of it, which turned out to be exactly what I needed.

You see, after Mom died, I got pneumonia. It gave me the perfect excuse to stay in bed all day for a couple of weeks sleeping and ignoring the world around me. I was too sick to let the grief really sink in. I lay in bed, and I cried - but I never could quite acknowledge whether it was from sadness or from sheer sickness and exhaustion from coughing. So I just existed in my bed. For almost a month.

I pulled myself together just enough to interview with a client who was doing something pretty spectacular. They were looking at ways to better monitor the long term health of clinical trial patients to eventually reduce the ill effects of chemotherapy. It was a little too close to home - Mom had died from long-term complications caused by her chemotherapy and radiation years earlier - but it was the only kind of work I was really capable of doing.

I dove in to my project, and I loved it. I loved my account team, and I started leading some efforts there. I took on a leadership role in our charitable organization. I let my work life fill up all the emptiness I was feeling everywhere else.

As the one year anniversary of Mom's death and her birthday (only 5 days apart) rolled around, I found myself starting to relax and let myself feel a little more. My project was under control, and I had such an amazing support network - we were building up to this 5 day break that was all about my mom - I felt safe.

Turns out, it was a little more than I could handle. Once the emotions really start flooding in, it's difficult to control the aperture. The anniversary was Feb 12, and we were celebrating on Feb 17, with a 4 day stint in Tahoe afterward to let me get my bearings. Once we had the date planned, I started letting go. By New Year's I had realized I didn't want to be in the relationship I was in at the time, by January I had pretty much stopped sleeping altogether, and by February I stopped pretending to be okay. On February 12, my best friend and I shared an amazing German dinner in honor of Mama, in which we told stories and showed pictures to our incredible bar manager - who made sure I had plenty of Underberg.


In those final days before the birthday celebration, I let myself go completely. I couldn't think about anything else. I couldn't sleep for more than half an hour at a time. I wrote a lot - some that I posted here and some that will never see eyes other than mine. But on Mom's birthday, my incredible chosen family - even those who could only join by phone - spent an evening with me that I will never forget. What I will always ALWAYS know, is that I am so blessed to be loved by amazing people. And in true Mom fashion, the evidence is in how much they ate!

They even supported me grabbing a lobster from the tank without staff seeing!


A couple of us stayed up until 4 or 5 in the morning talking. Just loving each other. I was so thankful because there was no way I was going to fall asleep. But I did. And the next morning we all got into our cars to drive to Tahoe. I had made it clear I wanted to drive alone. I needed to drive alone. I wanted a couple of hours to myself before the weekend with everyone else. I needed some time to talk to Mama. I left just a little before everyone else. As soon as I got onto 80, this is the first thing I saw.

This doesn't happen often, but I actually had to pull over because I was both crying and laughing so hard I couldn't really see the road properly. It was just too. damn. perfect.

I don't know if I believe in an afterlife. I definitely don't think people who die sit around trying to talk to us. I spent several months after my mom died wishing I could talk to her. Wishing so hard I could believe in talking to her. I even tried. I tried some form of prayer - just talking out loud, or even in my head - but I always knew it was bullshit.

I believe Mama is here because she lives within me. I believe her presence is in my mannerisms, my memories, and the things she has shaped in my behavior. I believe that's how I connect with her. When I break out one of her laughs - her signature deep-voiced "heh heh heh"- I used to cringe, and now I smile with pride. I frequently give myself the terrible relationship advice she would have given me before ignoring it as I always would have. I often look in the mirror and judge myself, and then find myself seeing the beautiful woman my mom was so proud to have raised.

My mom is here now because when I look at this picture of her making this crazy smile, I recall about a thousand pictures of me making that silly over exaggerated smile.

My mom lives now because she lives through me.

But for her to be some OTHER thing that can communicate with me? That's absurd.

So when this rainbow popped up on the highway, I actually thought in my head, "Mama?"

I pushed that away pretty quickly. I did try to talk to her. I stopped myself because it felt stupid, but I spent my hours on the road grieving and celebrating all that I could. By the time I got to Tahoe, the rainbow and the friends had given me this calm hope. I no longer needed to grieve or recover. I spent the next few days enjoying my time and moved on pretty quickly.

As soon as the weekend was over, I switched right back into "normal" mode. We had a couple months left of snow, and then had plans for a pretty epic Tahoe summer. My best friend was getting married and I was planning the bachelorette party. I was selling a new project to a client and delving into fun work stuff. And baseball was starting! Life had so many distractions to offer me!

It really was an epic summer.

And then about 3 weeks ago it started to fall apart. Tahoe summer ended. The wedding was over and all the people went home. And the last straw? The Cardinals lost. And then the Giants. So baseball was over. (I promise there's a post coming about why that matters so much!)

I know it was silly to think I could put a cap on my grief in the first place. I know it doesn't work that way. I also know I didn't plan for all the major fun things that had been keeping me excited since then to disappear at the same time.

So things have been a little harder lately. I'm a little more tired than usual. Being social takes more energy. I'm not as focused. I'm not as sure about all of my decisions. And I haven't been feeling great about any of that.

But this past Sunday morning I woke in Tahoe and I stepped outside and I saw a rainbow that felt like it was shooting right of the ground in front of me. I know that doesn't really mean anything other than what I take from it. I know what I'm taking from it, though, is that whatever I'm feeling right now is okay. It's part of the process. The choices I'm making now are good, they are solid - because they are grounded in love and pain and wisdom and hope. I know there's a rainbow waiting on the other end of the storms, and that's only part of what makes them beautiful.

But my first thought, with no hesitation, was... 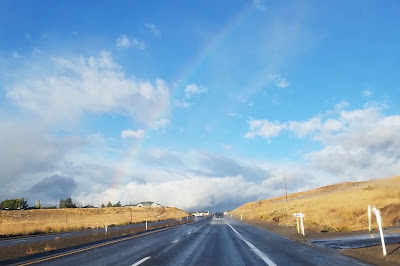