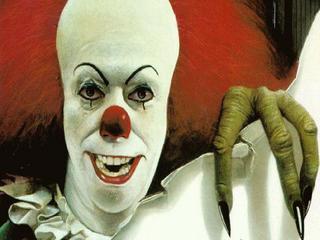 I've been meeting more and more people recently who are afraid of clowns. It's nice to know I'm not the only one. One of my favorite comedic writers does a great job spreading the fear:

I'm afraid of clowns, I'm not ashamed of it.

Mrs. Lee, my third-grade teacher, once invited one particularly angry clown, Frosty, to perform at a classroom holiday party. This was the same teacher who had developed her own brand of discipline by placing a dog kennel, previously used by her then deceased Great Dane, next to her desk and locking children in it when they misbehaved.

Upon Frosty's arrival, he bore a distinctive scent, one that as an adult I can now identify as gin, and when Sherry Pierce, the perfect third-grade girl who had hair she could sit on, mentioned this, he just looked at her and chuckled. The clown began his Clown Fun, which entailed knocking the kids on the head with a plastic squeaky hammer, pulling a mottled piece of red foam out from behind their ears, and creating balloon animals in obscene shapes. The clown got even testier when Michael Moorehouse, the obligatory chunky child, told the clown he wasn't funny. Frosty immediately lunged into action, swiping Michael's snack plate and saying, "I'll show you funny, fatty," and took a bite out of the green-frosted cupcake and reindeer cookie.

The clown trauma didn't end there.

Coulrophobia is so normal, in fact, that a movie has been made about it (other than Stephen King's It, that is), a support group, and a "rate the pic" type site called scary or not.

Monica...this is the scariest picture I've ever seen. I'm not visiting your blog until it's scrolled off the page...see you in a month or so.. yeepers...