When I moved out to San Francisco, months of bad habits had ballooned my weight up to the largest number I'd ever seen on a scale with me on top of it. I had moved from three very active part-time jobs (chasing kids around, shelving books, and climbing in and out of a giant cave all day) to my first office job in which I just sat on my butt. The new job also didn't allow the time or money for anything other than McDonald's, mac n cheese, and the occasional Subway sandwich. I had been dating someone who thought going out to the pub for fried chicken sandwiches and beer, followed by a bottle or two of wine at home, was a good idea...and who refused to even take a walk around the block with me. My weekends were spent driving to and from KC, rather than out enjoying the legs God gave me, and the combination of all of this did not work well for me.

I moved here in June of 05, and up until December of 06, I had lost ten pounds. I was proud of this weight loss, but it was wayyy too slow for me. Simply walking the city would have brought me back down had I not compensated by spending those first few months drunk every night in the pubs on Clement.

In January I gave up alcohol and caffeine when my stomach started acting up. I started monitoring my portion size and trying ot make healthier choices (like grilled chicken over fried chicken patty, roast beef over pastrami, no sauce (or mustard) over thick creamy fatty sauce, etc.). I limited my chocolate consumption, and very quickly lost 12 pounds. After my surgery I lost a few more because I couldn't eat much at all. Since I've been better, though, I haven't been making the best choices all the time, and I've been drinking more...so I was a bit concerned that I might have gained some more. I LOOK like I've lost weight, I feel like I've lost weight, but I was just scared that I threw it all out the window.

That is friggin awesome. I am soooo very proud. Woo hoo!

So to motivate me further, without giving any actual weight amounts, this is my goal chart, and I'll be sure to update once a month or so on how I'm doing and offer my tips for how I'm doing it without really dieting, working out at the gym, or taking any diet aids.

While these are my weight goals, as a former athlete I'm very aware that muscle weighs more than fat. Should I decide to start lifting again, then the weight goals would certainly change. Ultimate, that 3rd goal would be pretty ideal if I built up a bit of muscle to go along with it. And I just don't feel all that far from that happening.

Not as Cute as the Pigs 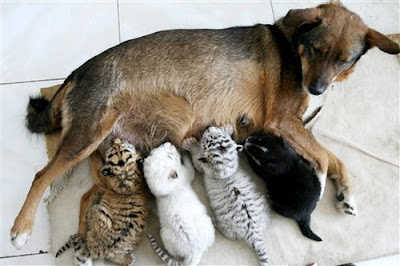 The best part is that the tiger triplets are all three different colors, and the pup just sets it off. Beeeeautiful!

Read the whole story.
No comments:

Yeah, those exclamation points--those are expressions of my excitement. (like the "ex" alliteration?)

It is absolutely blasphemous to call something "Big Cat Week" and include nothing about tigers.

BBC, I bite my thumb at you.
No comments:

A Tree Grows in Brooklyn

I'm reading Betty Smith's A Tree Grows in Brooklyn for the first time. I've been completely enraptured by this book, and it's been a very long time since this has happened. There's no suspense, no mystery, no greaat big plot to finish. So why can't I put it down?

Betty Smith writes so beautifully about characters that you can't help but identify with them. But still, I'm constantly urged to move forward in the book...why?

The beautiful storytelling offers a world of horrible poverty, but with a small dose of hope. I read it so voraciously because I am taking in that hope. The hope is certainly better than the actually obtaining of anything...and I'm enjoying every second of it.

I STRONGLY recommend the read.

One of my favorite passages so far:
A mother speaks to her daughter, who has just given birth. The daughter is concerned about how she will bring up good children. The mother tells her daughter to teach them of God, and Jesus, and Santa Claus. The daughter asks why she should lie to her children about Santa Claus, when she knows he does not exist.

"Because, " [the mother explained], "the child must have a valuable thing which is called imagination. The child must have a secret world in which live things that never were. It is necessary that she believe. She must start out by believing in things not of this world. Then when the world becomes too ugly for living in, the child can reach back and live in her imagination..."
"The child will grow up and find out things for herself. She will know that I have lied. She will be disappointed."
"That is what is called learning the truth. It is a good thing to learn the truth one's self. To first believe with all your heart, and then not to believe, is good too. It fattens the emotions and makes them to stretch. When as a woman life and people disappoint her, she will have had practice in disappointment and it will not come so hard. In teaching your child, do not forget that suffering is good too. It makes a person rich in character."
No comments:

Went to a new wine bar on Polk St. the other night. I definitely love the atmosphere, and the wines were interesting. The selection has a lot of wines that you can find in any local shop, and I'm not sure if that's a good or bad thing. We did have $10 custom flights, though--which is a very good thing. The food was okay...cheese plates are awesome, flatbread is good, and the goat cheese salad is good. The other stuff was disappointing--and don't try to the raviole unless you're looking for a bowl of mac and cheese with a half-inch layer of oil at the bottom.

We'll definitely go back for the wine, but what we liked most was the music. We kept asking about it, and they didn't know the name of the French DJ who puts it together. I found my solution, though. If i just leave the website open in my browser, I get the music all day. It's on a pretty long loop. I haven't hit the end of it yet. I'll note how long when I reach it.

So give it a try: Amelie Music

**Update**
Okay, so it was only about an hour. But it was still great!
No comments:

"I am overwhelmed by the Lord today."

Not something you hear everyday in this city.
No comments: