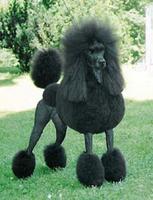 Due to the incessant need of Laurel Heights and Presidio Heights families to own expensive and well-groomed (read: showy) dogs, I've recently had to overcome (at least a bit) my fear of poodles. Yeah yeah, I know...but they're big ugly mean creatures, and for whatever reason, I've been scared of the breed (and only that breed) since childhood.

As I entered the dog park last week, a giant black statue of fuzz ran toward me. I started to flip out, until I heard him being called back by an accent that so closely matched my mom's that I just had to feel a bti at home. I sat next to the man, despite the big ugly poodle, and talked with him for awhile--he in his native German and I in my broken version. The poodle actually turned out to be pretty nice, and I was more interested in the conversation (and feeling a connection to Mom who is oh so far away now) than I was in noticing my fear. Soon, two other poodles showed up to play. Okay, so I'm not as comfortable with the others yet, but maybe I'll get there. For now, my joy in not panicking at the one is pretty damn nice.

Yeah. how can you not be affraid of that? They're not so bad when they aren't shaved like some star trek thing.

WTF are people thinkng? My dog looks okay, but it's be better if it resembled topiary.