the last time I flew to Hawaii 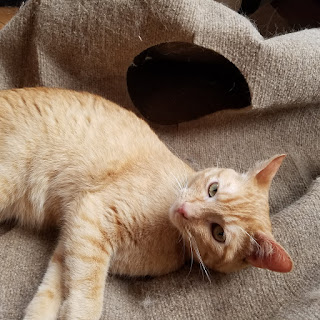 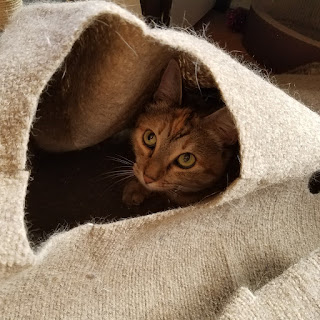 Three years ago I left these monkeys for the first time. I had adopted them in fall, had back surgery in March, and spent all of spring and summer in bed watching them. That is, when I wasn't in physical therapy. The trip would be a test. Was I ready to travel again? Could I do a hike? Could I dive? Maybe even surf? I had no idea. And these cuties were less than a year old when I left them on their own for 3 weeks.

I had planned the trip because I was starting a new job at a new company, and I wanted to spend some time with my mom and get in a few beach days before I really put my head back into my career. I went home and had an amazing week with my mom, and then went to Kona with my best friend, and then to Kauai on my own. I even delayed my return a couple of days because I was so happy there.

As I played with the kittens today before I left for Kauai once again, I thought about how much they've grown, and how far I've come. In my last job, I wouldn't have taken this trip. I wouldn't have felt like I was allowed to leave during a go-live, regardless of the circumstances. Any issues arising during testing (as they always do and definitely did this week) would have made me change my flight. Both my company's strong work-life balance and my priorities as I've matured helped this one along. I'm thankful for that change.

I'm also thankful that this time I won't be in Kauai alone. My friend is joining me so we can have some one on one adventure time before she starts a family. I'll cherish every moment.

I'll even be diving with the same folks that took me out last time. I can't wait to see more of this beautiful area.

Only three weeks into my new job, I got a phone call that pulled me out of my new company's big quarterly gathering, made me miss a close friend's wedding, and led me to take 12 weeks off of work over my first 6 months. My mom died in February, and it was at least this time that next year before I was even functional again. I didn't travel for quite some time.

I used to travel a lot. First it was because I was lucky enough to have a partner who traveled and showed me that it was something worth prioritizing. And then because my work took me to exotic places. Long plane rides, getting through TSA, and status (oh how I miss my 100K!) were the norm. Last year I went to Mexico, but that doesn't seem like traveling, really. This year, though, I struck my travel bug again with my trip to South Africa, Namibia, and Germany. I grew in the three weeks I was away in a way you just can't when you're at home.

And so right now, I sit in the airport lounge. My flight is delayed, but I love being here in the airport. There are fires and disasters with my client and even at my company that would normally have me so stressed out I wouldn't feel good about leaving. And I'm so extremely happy.

I'm about to get on a plane to go to a place I know and I don't. I'll see some things I haven't seen before. I'll have some new adventures. And I'll do most of it with one of the people I love most in this world.

I feel a little bad about leaving these adorable kittens at home. I feel pretty guilty about leaving my team when there are bugs that need to be fixed and people need a leader to guide them to launch. But what I know now is that any day, any time, no matter how much you plan for it, you can get a call that changes everything. As much as those of us who plan for a living want to plan, we can't plan for everything. There's no such thing as contingency in life.

So I'm excited to get on that plane, even if it means handling a few disasters from the beach. As long as I can do it with a pina colada in hand while the waves splash against my feet.