I'm Having Back Surgery Today

Yesterday, completely frustrated, I put my latest post up on Twitter and called out Aetna for not authorizing the surgery. Their reasoning was that the doctor had requested authorization for a March 6 surgery. They have a 7-10 day SLA, and it had only been 7 days.  It didn't matter that the surgeon was now requesting surgery the next day, or that he had cleared his schedule to allow for what he considered an emergency.

Surprisingly to me (I'm just starting to learn the power of twitter), aetna responded to my post: 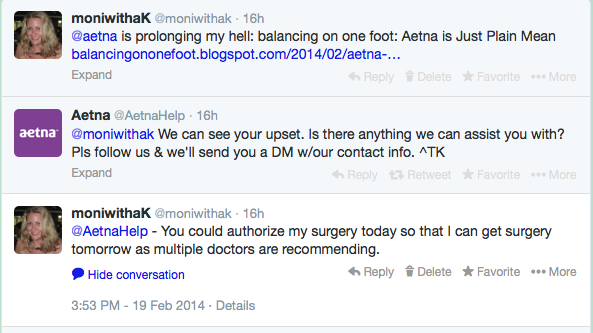 They called me and left a message telling me they were on the phone with my doctors working on the case, and they gave me direct phone numbers to individuals. My doctor's assistant had been fighting with the insurance company for a couple of hours when all of a sudden they referred her to the appropriate contact who approved the procedure.

I'm amazed at the power of posting my frustration online. I'm impressed at how quickly Aetna responded and how personally they took this case. Kudos.

I'm still sad that I had to go to twitter to get this taken care of.

Regardless, I'm having a desparately needed surgery today.
Thanks, @aetnahelp

I'm a little dismayed that the Aetna representative doesn't know the difference between "you're" and "you"... but I'll forgive them in this case! :)