I am a Moron

I had a bit of an emotional break on Sunday night taking care of the ex's cat. In looking for a bowl to put down extra water, I opened cabinets to find MY dishes. Dishes I'd had since before I met the ex. I knew of course that I had given him these dishes...but to see my dishes in his apartment was a little jolt to me. I noticed on his counter that he had bottles of wine that we'd picked out together. Also, we raised a kitten together. And seeing his new cat in kitten stage...seeing him make choices he learned from our experience. It was all a little much.

That night I had a dream involving kangaroos - I'd been viewing someone's pics that evening - and I woke up thinking about the Australian wine we chose together. The really good (relative term for a region that specializes in Sancerre) bottle of  Shiraz we brought back from the Hunter Valley (from a beautiful winery called Iron something or other) has been waiting for me to have a moment like this. The wine represented a time when my future was planned much differently than it is today, and I wanted to toast to that memory and drink it away.

I pulled out the bottle with A, but we couldn't finish it. We acknowledged that it wasn't something we'd normally drink, but we tried to take it in context. This was a red wine from a region known for sweet whites. That's why it was really fruity and too sweet. But it meant something to me. And I knew I had liked this wine in Australia.

After a glass I turned to A and asked if she was sure it wasn't corked. She confirmed that it wasn't, and that this was just not a wine we would normally drink.

The symbolism inherent in a wine that I had loved and hoped for and waited for turning out disappointing was just too much for me to bear, and I couldn't have any more. But I also couldn't bring myself to pour it down the drain. This wine meant something. I was certain the taste I didn't like was based more on my emotion than on actual flavor qualities.

In a fit of not caring about providing alcohol to the homeless, I hoped to find someone on the way home who could use a little bit of a warming up (yep, judge me now). The two guys normally camped out on California weren't there. The woman on Hyde was nowhere to be found. I wanted someone to appreciate this wine.

It occurred to me that my neighbor might enjoy trying a wine that can't be purchased here, as he is just starting to really learn the ins and outs. So I take over the remainder of the bottle, but he makes it very clear that it is, in fact, shitty wine. I take another sip and finally admit to myself that it's awful. The altitude from the flight must have killed the flavor. I was upset, but there was also something slightly liberating about pouring it down the drain.

So this morning I get a text with a pic attached, asking me why my Australian wine has a California label. I look at the picture, scour my wine racks, and let my mistake sink in.

This is the wine I had last night. You can buy it for $7 in discount stores. Don't buy it. It's crap.

And this is the wine (unopened) I brought over from Australia. You can't buy it here, but if you bought it there it would be currently be about $25. 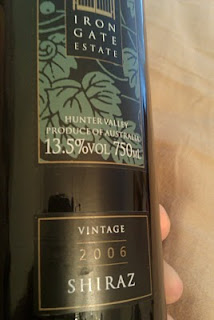 I got emotional over a crap Lodi wine (also from a fantastic trip, though!) while my Hunter Valley shiraz sat safely in my apartment.

On the upside, I think I've embarrassed myself enough lately that I no longer have any shame.

great story, m! i wish i could come over and drink the australian with you.

I really really enjoyed reading this! You have a good writing style.

that wine was pretty crappy. hopefully the australian one will be better! ;)