My friends and I have been talking more and more about the Nice Guy lately. I think it started with the Feathery Stroker excerpt and the night with Period Boy.

Period Boy was a very sexy, very fun guy my girlfriends and I met at a club in Vegas. He became known as Period Boy because after spending an hour or two dancing with us and his friends, he started pouting anytime he wasn't getting enough attention. He got all sulky and needed to be attended to. Obviously, we got bored of this very quickly. Cuteness does not make up for the need for a babysitter in a grown man.

And then I came across the ad about a man's job, and it all started coming to a head. Coincidentally, it's also been coming up more in my blogroll, and I've been feeling inclined to say something about it. Amanda over at Dating is Miserable recently even had a slew of guest bloggers write about the issue. I'm not sure I'm talented enough to accurately capture everything that's rolling around in my head, but I'll try for the essence here.

Having pretty much always ended up with the self-defined Nice Guy, but having had enough experience with his opposite to feel expertly qualified, I think I can diagnose this issue as a problem of semantics.

The Nice Guy we root for in movies is nice, but he's still the Man in the relationship. He still knows how to handle his woman, and hot sex is not automatically thrown out the window just because he brings the female protagonist a cup of soup when she's sick.

So what makes him more appealing than the Nice Guy we meet in real life?

Well, for starters, it isn't about Nice vs. Not Nice.

The original Nice Guy debate sees to have stemmed from the difference between the bad boy that's fun and exciting versus the nice guy that will always be there and is thoughtful and, well, nice. In this face-off, bad boy gets the dates and nice guy gets the wife and 2.5 kids.

Side note: this doesn't even begin to address the problem of Nice Guys learning to affect Bad Boy characteristics and Bad Boys pretending to be Nice Guys, which Amanda deals with in her follow up to her guest week.

But that's not what we're dealing with in dating anymore. That's an oversimplified version of the real issue. Rather than having 2 men: the Bad Boy versus the Nice Guy, I'd argue, that there are really more like 4 archetypes, with dots on the spectrum all across the way. I propose using 2 variables (I'll leave incorporating other planes to someone out there who has far more time than I do): Nice and Sexy.

I propose The Nice Guy Graph: 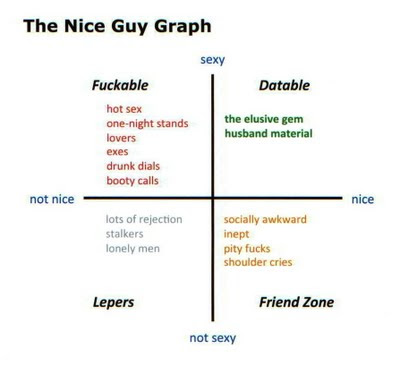 Being the complicated and never satisfied woman that I seem to be, however, I simply can't settle for one or the other. I want Nice and Sexy. I believe this is what most women want (although I can't really speak for all of us, now can I?).

The problem for me is that most of the nice guys I meet are too passive (asking me for the first kiss, not making a move at all), too sensitive (they want to talk about their feelings more than I do), too open and available (they lose all mystery, which is fun), too inexperienced (they have had less experience because they don't just take what they want, so they just aren't as good in bed), too humble (confidence is key!), too complimentary (if you worship me so much, maybe I'm out of your league), too...well, feminine. But most of the truly sexy men I meet are too mysterious (you've gotta open up a little), too arrogant (c'mon...you've got to have some weaknesses), too insensitive (I don't want to cry at home b/c you were a douche...this is when Nice Guy gets called), and too assholeish.

There's got to a balance. The aggressive man who takes what he wants but is happy to work to get you to want it, too. The guy who is open and honest without divulging all of his insecurities. The guy who makes you feel sexy without making you feel like he's not good enough for you. The guy who is confident without arrogance, rough with tenderness, and has the answers but doesn't mind asking questions.

I think the key factor for me is capability. That upper right quadrant is a capable man.

He is capable of love, romance, commitment, conversation, emotional sharing. But he is also capable of turning you into goo with a look from across the room, kissing you in a way that makes you think you never need to breathe again, getting what he wants in life, keeping you interested and excited, getting into trouble, getting out of trouble, fixing things. He is capable of handling me in all of my complexity. (On this - Amy Brown wrote an interesting post on how she doesn't like Nice Guys because she's not a Nice Girl. She poses that Nice Guys just don't want her because she's too complicated and restless. This seems right on for me. You can read more Nice Guy posts over at the Heartless Bitches archive.)

He can party you under the table, but will get you home safe and get you that awesome bowl of chicken tortilla soup for brunch the next day. After a night out he'll have you up against the wall before the door is closed, but the second time around, he'll take his time and be sweet and slow. He'll have his own life, his own friends, his own dreams, but he'll be there for you and support yours. He'll make you dinner, but he won't feed it to you unless it's leading right into dessert. He'll feed your cat when you're out of town, but he won't coo at it in baby talk. He'll fix your internet and your broken lock; your emotional drama and your sexual frustration. He is capable in many ways on many levels.

My favorite image of the Upper Right Quadrant Guy?


i chuckle sometimes
i really do
i chuckle when you mistake
kindness for weakness
not malicious
i know
your warm dark eyes twinkle
lips turn up just a little
still
the smugness
irks
i'm nice
it's true
and i like being good to you
but
if i thought for a minute
a second
that you took it
for granted
you'd miss
popsicles and west wing dvds
when you are sick
and wearing those thread-bare pjs
you got when you
were sixteen
penguins!
you'd miss
me sensing the need
for a back rub
a foot rub
a soft but sturdy shoulder
when your boss
doesn't realize
everything you do
and are
and can be
you better
appreciate
because
well
i guess
what i'm saying is
baby
i will remember
our anniversary
and cook you a romantic dinner
but you better believe
when we're done eating
i'll be bending your ass over that table


And with that perfect thought, I'll leave it to you all to add your thoughts.


Oh...and you can read more of Peter's stuff on his blog.

Thanks so much for the kind and pimpage.

when i meet someone, i dot at the vertex. depending on who i'm with, i'm inspired to move into one of the four quadrants. :)

also, the upper right quadrant needs to have a gradient, because just being in "upper right" isn't enough.....they have to be "upper right" enough to be husband material.

What you really want is nice and borderline sexy. Easier to get, not totally clueless, and is semi-trainable. Someone too perfect has no incentive to improve and generally doesn't know how to work on a relationship.

Pete - I think I need to add a circle around the vertex for guys like you. :)
And I totally agree...it's all about gradients, right? It totally has to be about the right mix of qualities to make it work well between two individuals.

Pope - Noooooo! I want full on sexy. I don't want to train anyone. Maybe some girls want borderline. Maybe that's because they feel like they're borderline? I think I'm maybe borderline nice, and could deal with the guy being borderline there and needing to be taught. Regarding sex, though, I'm far past the point of wanting to teach much. Maybe a little for the right guy. :)

I've been wondering what the two axes for women are. Perhaps attractiveness and mental health.